Last update: 16/09/21
WE SERVE YOU WITH OUR RHINOPLASTY CENTER!
We successfully conduct Rhinoplasty surgeries at our hospital.

What is rhinoplasty, to whom it should be applied and how is the method of surgery decided?

Rhinoplasty applications are conducted to remodel nasal bones and cartilages, beautify the appearance of nose and also enhance its function. It could be applied to all individuals who are above the age of 16, have aesthetic concerns and/or experience difficulty in breathing. There are two methods as open and closed surgeries. The method of surgery is determined as a result of medical examination and discussions held in accordance with the doctor and patient relationship.

Each patient has a different nose anatomy, bones, cartilages and skin. Therefore, there is no standard duration of surgery because there are many different factors that affect the duration of surgery. It takes 2 to 4 hours on average. It is not possible to provide the same nose to all patients. It is important to conduct face-to-face meeting between the doctor and patient. The demands of the patient and the procedures that could be applied by the doctor must be significantly compatible.

What about the psychological aspect of nose remodeling?

As nose is the most remarkable area on people at first sight, the correction of the deformations there is quite important from an aesthetic and psychological point of view. These surgeries conducted do not only beautify the nose of patients, but also improve their psychological well-being. This is a very sensitive issue. Only who suffers from it knows it.

For example the individuals, who think that their nose is arched, large or bent out of shape, try to stay away from crowded places as they do not feel good within the society. They do not allow their friends to take pictures because they do not like its appearance. They try to fix, filter and cover up each picture they take. It’s especially a big trouble for young ladies aged 18 to 25. After a while, these individuals start to withdraw from the society and live away from social life.

According to the feedbacks we receive from our patients that went through this surgery, they become stronger and more confident individuals in social environments after the surgery. Also, their psychological well-being is significantly improved and their confidence is increased according to the psychological assessments conducted before and after conducting a surgery on the relevant patients.

Being more beautiful or taking a breath?

Although nose is an area that might cause aesthetical concerns, it is functionally our most important organ that enables us to breathe in clean and humid air. The purpose of the surgeries is to create noses that have beautiful appearance and also breathe in easily.

In the aesthetic surgeries conducted in the past, intervention had been made only to the appearance of nose, and aesthetically beautiful but non-functional noses had been created. Surgeons had generally offered two options as being more beautiful or being able to breathe. So, they had applied a surgery only to the inner or outer part of nose. In terms of the Ear, Nose and Throat Surgery; we have excellent command of both aesthetic and functional characteristics of nose. In our operations, we create aesthetically beautiful noses that can breathe easily. Our main purpose is to create aesthetic noses that can breathe comfortably.

Due to the nose surgeries conducted in the past without using technology, patients had 3 major fears. As doctors, we conduct nose surgeries every day, but most of the patients do not know anything about this experience and what happens before and after the surgery. Our purpose is to explain to them as much as we can that they do not need to be afraid of this surgery. I recommend all individuals, who would like to have this surgery but have fears, come to visit us and discuss and get more information about the steps of this surgery.

The surgery process of a patient will be more comfortable if the doctor and patient relationship is sincerer and stronger.

So, what are these fears? The frequently asked questions…

As I mentioned previously, due to the bad experience in the past, rhinoplasty surgeries cause fears for those individuals that have suspicions and concerns about this surgery because of the statements such as ‘‘it causes too much pain, it will swell even around your eyes, and when they remove the nasal packing, it is even more painful than giving birth’’.

Thanks to the improved techniques and the use of existing innovative methods in the field of medicine, rhinoplasty surgeries are even simpler than before. With Piezo, an ultrasound bone cutter and trimmer, these fears about rhinoplasty have been partly eliminated. Severe edema, bruise and pain caused as a result of breaking bones by using a hammer in an uncontrolled way has been minimized. Possible dangers such as dent and bent in bones have been eliminated.

Piezo allows for remodeling the nose by easily cutting or trimming nose bones in the form of a thin line like a glass cutter cutting a glass ultrasonically. As a result patients become more comfortable in the post-surgery period. Our patient satisfaction ratio has increased as a result of the Piezo surgery implemented by us as the Ear, Nose and Throat team of our clinic at the Private Vatan Hospital. According to the majority of the feedback received from our patients, they say ‘‘I wish I had a surgery before. There is nothing to fear”.  The bones are cut and modeled in a controlled way without breaking them so bruise, edema and bleeding are minimized. The pain that occurs after the surgery is similar to other standard surgeries and can be controlled by taking drugs. 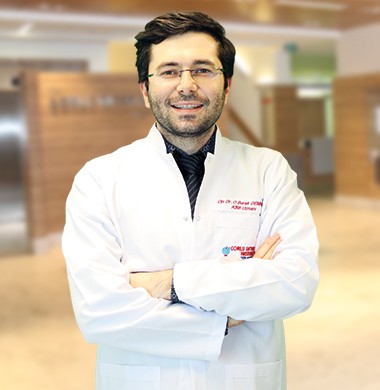 He was graduated from Süleyman Demirel University, Faculty of Medicine in 2012. He completed his specialization education at Namık Kemal University, Department of Ear, Nose and Throat between 2013 and 2017. In addition to his successful surgeries, he is particularly known for “Rhinoplasty’’ surgery.

Grigor, who had been complaining about being unable to breathe, has recovered his health!

Grigor Kirilov Nikolov from Bulgaria had been suffering from nasal congestion and the inability to breathe through his nose for years when he applied to our International Patient Unit. The patient was invited to our hospital for a detailed medical examination following the preliminary conversation.

Severe Septum Deviation was discovered after examinations performed on Mr. Grigor, whose visit to our hospital had been planned in advance. M.D. Burak Demirel, one of our Rhinoplasty Center’s physicians, stated that the Septoplasty operation would solve his problems. Our patient, who chose to have surgery, underwent preoperative examination and all tests.

We discharged our patient after 1 hour of Septoplasty Surgery and one night of hospitalization with no pain or bruising.

As the 40th anniversary of Çorlu Vatan Hospital, we wish Mr. Grigor a long and healthy life.

Mehmet Avcı (36), who applied to our hospital with the complaints of nose deformation and breathing difficulties, was examined by our Ear, Nose and Threat and Head/Neck Surgeon Burak Demirel. Through the Ultrasonic Rhinoplasty he has obtained functionality and aesthetical appearance.

The nasal packing of our patient was removed in the follow-up examination conducted on the 10th day following the Ultrasonic Rhinoplasty surgery, and tape was applied to him. As Private Çorlu Vatan Hospital on our 40th anniversary, we wish a healthy life to Mr. Mehmet, who expressed his satisfaction with the conducted surgery to our doctor and his team.

Surgeon MD Burak Demirel, an Ear Nose Throat and Head and Neck Surgery Branch Specialist at our Hospital indicated that the nose breathing-in problems, septum deviation, polyp and deformations could be resolved in the same session by using minimal invasive methods. Eliminating both aesthetic and functionality concerns with a single surgery enables us to obtain good results in our patients and get positive feedbacks from them.

We conducted general checks in the first week following the Rhinoplasty procedure that was carried out by using Piezo (ultrasonic cutting) method for our patient named Rayna Yordanova Todorova, who applied to our hospital from Burgas City with breathing-in and aesthetic problems, and then we bid farewell to our patient for the summer holiday.

Ms. Rayna, who declared her satisfaction with the procedure conducted, thanked our doctor Mr. Burak and our Bulgarian translator Ms. Sevinç for their interest and attention.

Our patient, Lidiya Mitkova Kyurcheva, had breathing problems due to the deformity of her nose, she was complaining about her prominent ears. At the end of March, Ultrasound Rhinoplasty and Otoplasty were performed in a single operation. She came to visit us today for the control.

Our patient expressed her satisfaction with the operation and would recommend our hospital and Dr. Burak Demirel to her friends and acquaintances.

We, the family of Çorlu Vatan Hospital, wish Ms. Lidiya a healthy life.

BEFORE AND AFTER PHOTOS

As the first private health institution of Thrace, we contribute to public health without deviating from our treatment principles with business ethics, honesty and compassion...